ARRL Field Day
Our first contest of the year in March did not go very well at all, we had a good team to put the antennas up but we were short of operators to cover the 48 Contest.  All was not lost it was decided that we would use the weekend as a training exercise ready for the WPX contest at the end of the month. This was a good call because it allowed members to get used to the new logging software and to hone their skills without the pressure of contest conditions.


40m Phased Verticals
An addition to the usual aerial farm at Oysterber for the 2015 CQWPX SSB contest were a pair of phased verticals for 40m. These were provided by Stewart G3RXQ prior to being set up at his home QTH in Melling.

The verticals are a couple of 12m Spiderbeam poles set ¼ wavelength apart (33ft on 40m), and orientated roughly East/West. The elements are wires 31ft long attached to the poles.

Each vertical was installed over 21 ¼ wavelength ground radials and fed via 50 ohm RG213 coax from a center mounted phasing/switching box. Inside the box were relays which could be remotely switched from inside HRH to reverse the feed to the verticals.

Installation on-site was fairly quick with the laying out of the radials taking the longest time. However, when the resonance of each element was checked one was found to be spot on (7.1MHz), but the other much lower (around 6.9MHz). This remained a mystery until after the contest when it was noticed that the radials of the LF vertical were laid right over where the 20m vertical has its ground plane. Moving the array further up the field should remove the problem.

Despite being somewhat off-tune those who used the array in the contest seemed quite pleased with the performance. Nearly double the number of station were worked on 40m in this years WPX compared with 2014. The number of prefixes worked should also be up.

The antenna currently being built by the group should have a similar performance and prove most useful in future contests.

Thanks to Stewart for the input on the contest and antenna's

Welcome to our Blog

We are a very active Amateur Radio Contest Group based in Morecambe, near the city of Lancaster, Lancashire. Founded in 2004. We enjoy all forms of radio contests and DXpeditions, any mobile/portable operation and plenty of construction projects. We occasionally host talks and visits from other like-minded Groups and Clubs. Our Contest call is G1T.

We are always interested to hear from anyone that would like to be involved in contesting or any aspect of the hobby and would like to join us. See our details on our homepages or on QRZ.COM

We meet every Monday at 8pm

If you are passing do pop in and see us! In the meantime browse our blog and please take the time to sign our guestbook! 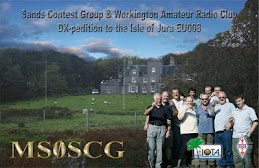